Top 30 things to do in Fukushima according to TripAdvisor

Fukushima is called to be the primal scenery of Japan on display throughout the four seasons within a year. Offering over 130 steaming hot springs, such as Iizaka-Onsen, Iwaki Yumoto-onsen, and Higashiyama-onsen, Fukushima Prefecture is located in the southern part of the Tohoku region about 200 kilometers from Tokyo and is the third largest prefecture in Japan. Fukushima’s features lie at the traditional Japanese culture which still exists there, and at the industrial prefecture with the total value of goods shipped being the highest in the Hokkaido and Tohoku regions.

Fukushima was one of the prefectures which were damaged severely by the Great East Earthquake in Japan 2011 besides Miyagi and Iwate. The earthquake and tsunami triggered the worst nuclear accident since Chernobyl. The Fukushima Daiichi nuclear power station located on the Pacific Ocean coast received huge damage by the earthquake and tsunami. The piping facility in the building, the facilities for the external power supply and backup power were destroyed. Like a phoenix rising from ash and dust, Fukuoka present-day has its own unbelievable energy to regain its prominence after the tragic natural disasters. Let’s check for the best 30 things to do and places to visit in Fukushima 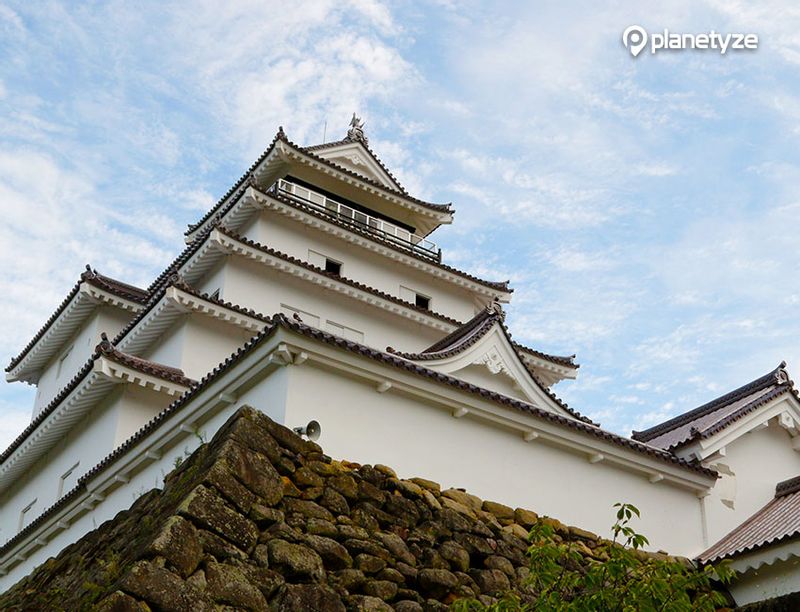 Tsuruga Castle（Wakamatsu Castle）
Wakamatsu Castle, located in Aizuwakamatsu City in Fukushima Prefecture, is also beloved by the local people under the name “Tsuruga Castle”. It is also known as the famous castle which withstood attack during the Boshin War.
read more 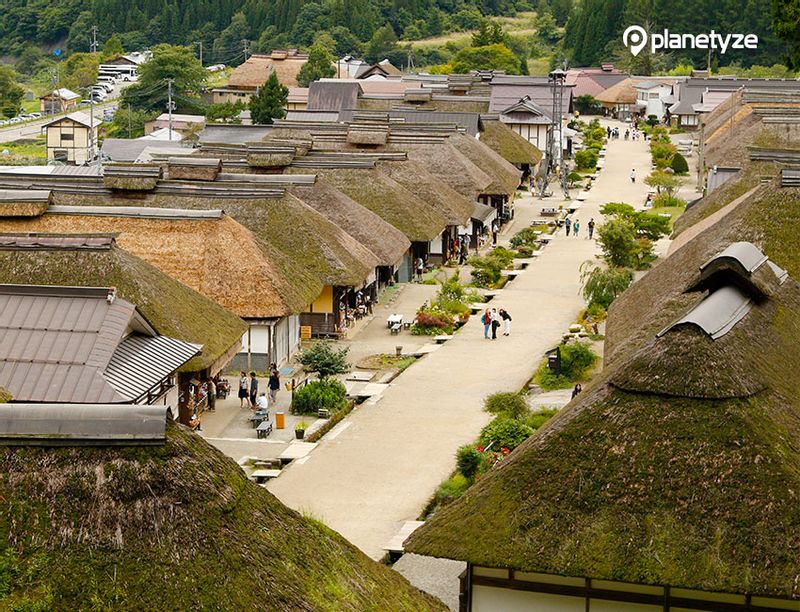 Ouchi-juku
An Important Preservation District for Groups of Traditional Buildings, designated by the government. It was a post station on a major road and was utilized by travelers for “sankin kotai” (alternate attendance to the court) policy during the Edo era. It is a valuable place where time seems to have stopped.
read more Goshiki-numa
The mysterious changes in the blue color of the marshes is intriguing. You can see the color change depending on the sunlight and your viewpoint. Depending on the season, the view will also completely change as they melt into the surrounding nature.
read more 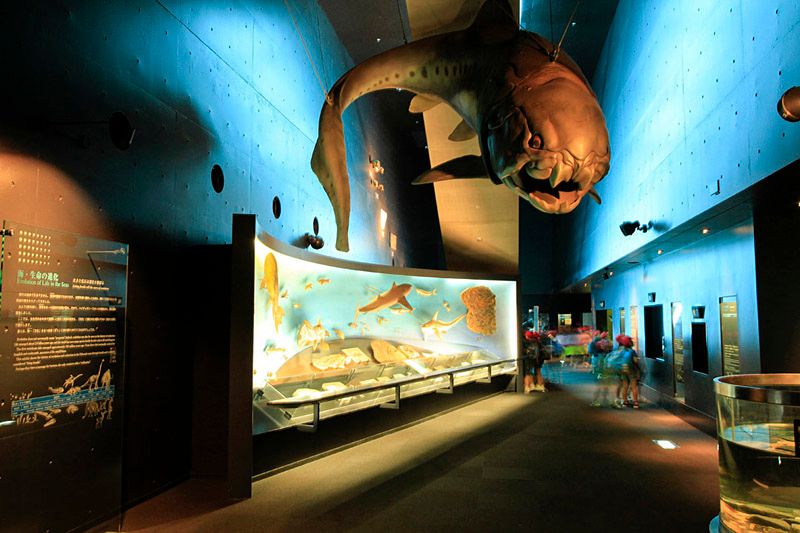 Aquamarine Fukushima
An enthusiastic aquarium that is more like an undersea museum, educating people through workshops, special exhibitions and lessons. Enjoy learning about the mysteries of the sea.
read more 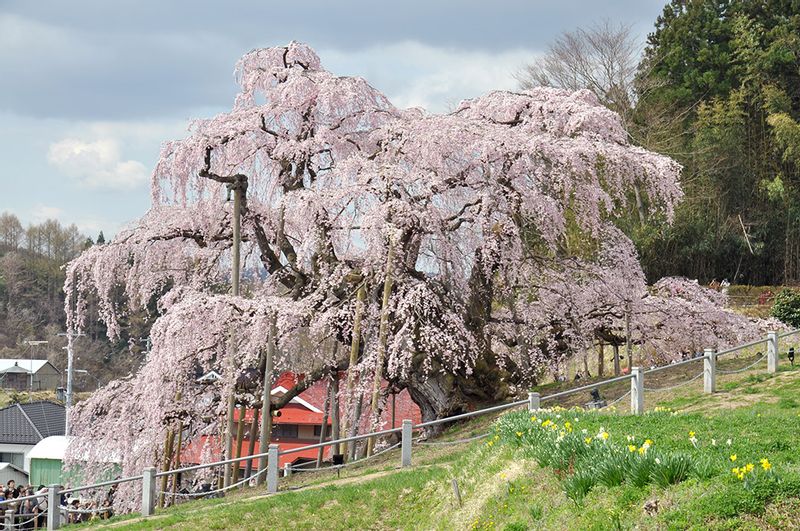 Miharu Takizakura
A famous tree that has been branded as one of Japan’s Three Great Cherry Trees. The “Miharu Takizakura” tree has also been recognized nationally as a Natural Monument. The overflowing cherry blossoms on branches that spread out in all four directions have a beauty that is breathtaking.
read more 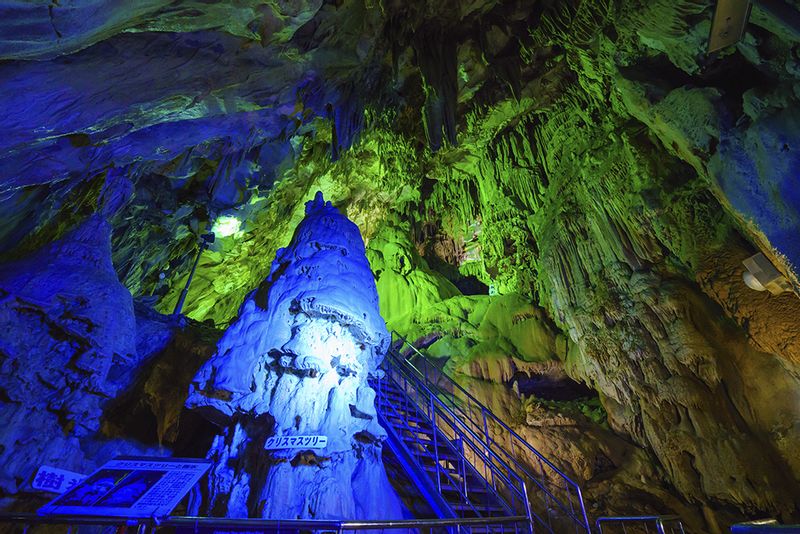 Abukuma-do Cave
Enjoy the natural artistic formations that took 80 million years to be created. It takes 40 minutes to tour this cave that has the greatest number and types of stalactites in East Asia.
read more 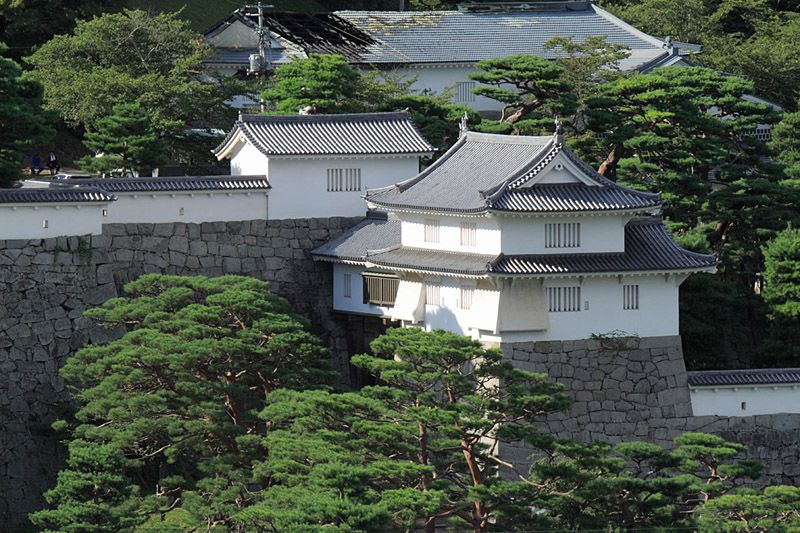 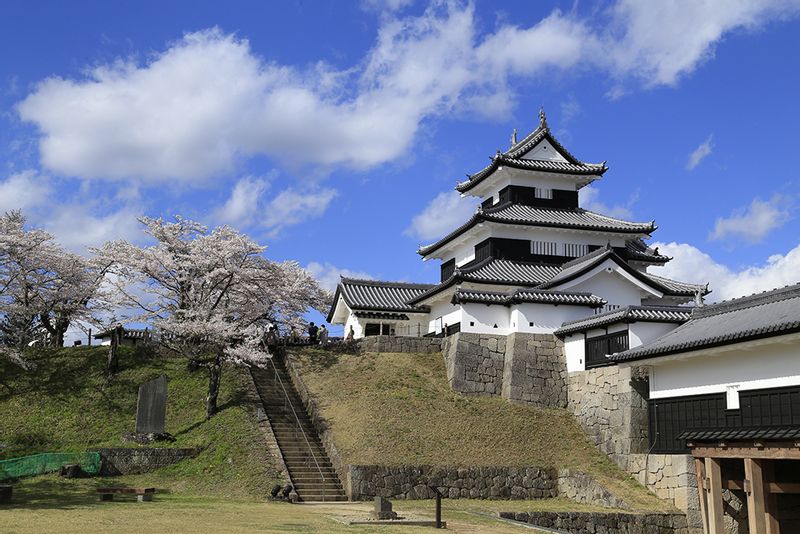 Shirakawa Komine Castle
This castle has been nationally designated as a Historic Location and has been selected as one of Japan’s Top 100 Castles. Famous as the gateway for the Oshu domain, its wonderful 3 story fortified tower and main gate have been faithfully rebuilt according to drawings from the Edo Era.
read more 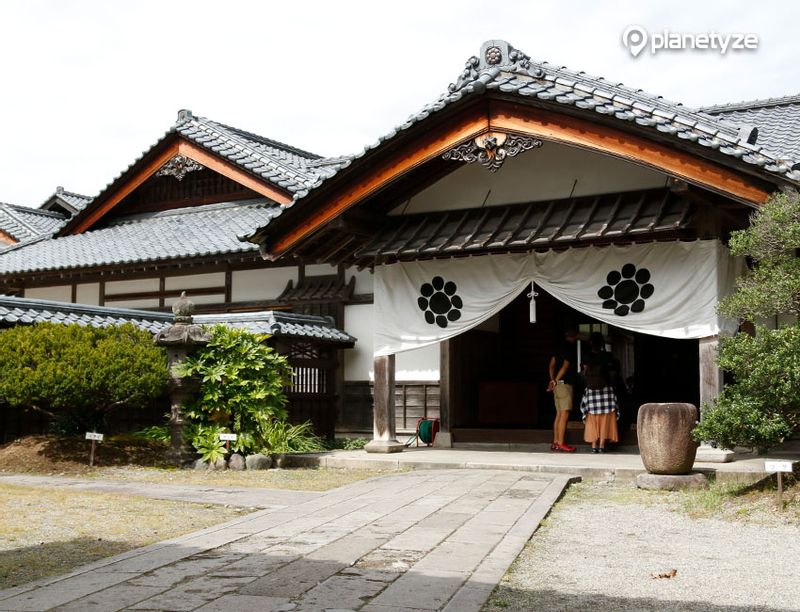 Aizu Samurai Residences
There are many historic buildings that give you a glimpse of the samurai lifestyle, beginning with the residence of Tanomo Saigo, a retainer of the Aizu clan in the Edo Era. There are also shops selling Aizu specialties and an interactive corner.
read more Sazaedo Temple
Built in 1796, Sazaedo rises 16.5m in the air. The inside of the temple contains a double spiral staircase so that worshipers can tour through the facility without running into each other. This is a temple with a truly unusual construction that stands out in the world.
read more 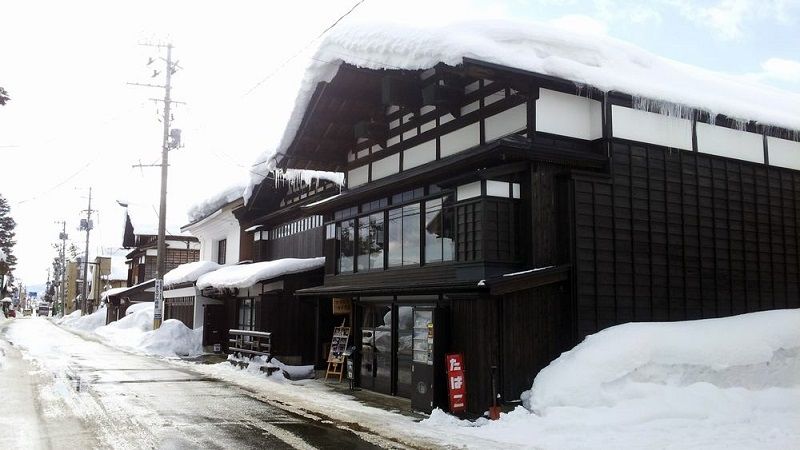 Nanokamachi-dori
During the feudal age, the area by the western gate of the castle town of Aizu was very lively. From the west side of Noguchi Hideyo Seishun-dori street to Nanokamachi Station, this area has a nostalgic atmosphere
read more Lake Inawashiro
Known as the “Heavenly Mirror Lake”, Lake Inawashiro, with its high clarity, can be enjoyed for its water activities. Along with marine sports and camping, you can also fully enjoy the grand scenery on the pleasure boats which arrive and depart from Nagahama.
read more 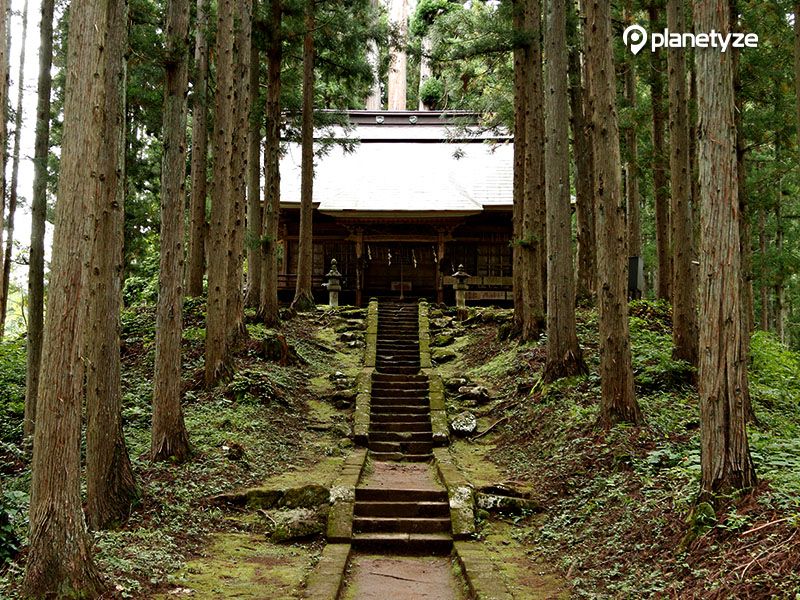 Takakura Shrine
Just a 15-minute walk from Ouchi-juku, Takakura Shrine is beloved as the guardian deity for the district. A member of the 12th-century Imperial family, Prince Mochihito, is enshrined there. A huge 800-year-old cedar tree with a height of 56m soars into the sky to provide a mystical presence.
read more Takayu Onsen
Along with Zao and Shirabu, Takayu Onsen is known as one of the three high-altitude hot spring villages in the Oshu region. Its white cloudy waters have many medicinal properties which has given it the name of the Kusatsu Onsen of the Tohoku region. All of the facilities can be enjoyed for the waters flowing straight from the source spring.
read more Maezawa Magariya Village
Designated as an Important Preservation District of Historic Buildings, a unified landscape has been preserved. At the museum which makes use of one of the houses, you can experience the farming lifestyle of those days.
read more Megumi no Mori (Blessed Forest)
A 920ha primeval beech forest which is a forest preserve known as “Kyodo no Mori”. Get a feel for nature with all five senses on a trek that cuts through a marsh.
read more Oze National Park
The 29th national park covers an area straddling the four prefectures of Fukushima, Tochigi, Gunma and Niigata. With an area of about 37200ha, this natural area of huge wetland and surrounding marshes has an impressive beauty.
read more Iimoriyama
During the war at the end of the shogunate system in the 19th century, the Byakkotai was formed to protect the Aizu region and consisted of 16 and 17-year-old boys. It was in this famous area of Iimoriyama that they tragically killed themselves. The graves of those boys and a gift from the city of Rome in the form of a stone monument are among the features which can be seen here.
read more Yunokami Onsen Station
Yunokami Onsen Station enjoys a lot of popularity among railway fans for its thatched-roof building which evokes a lot of countryside feeling. There is a sunken fireplace inside and you can relax at the footbath onsen. You will also want to take a walk through the idyllic townscape and the surrounding nature that spreads out.
read more Spa Resort Hawaiians
The whole family can enjoy attractions galore beginning with the various shows. There are also many accommodations, so spending a day to your heart’s content is no problem.
read more Tadami Beech Center (Tadami Beech & River Museum)
A facility maintaining the lush natural environment of the Tadami region and the life inhabiting the area. At the center’s museum, the research is displayed and introduced.
read more Oyakuen
Oyakuen’s (medicinal plant garden) name was derived from the fact that various medicinal plants have been cultivated here. An Edo Era strolling garden, you can enjoy that walk while going around a pond. You can also sample a secret medicinal herbal tea and English afternoon tea within the garden.
read more Forest Branch School Fuzawa
This is an interactive learning facility that was restored from an abandoned branch school. Have an unforgettable experience of the culture of a mountain village by getting a taste of farm work and food culture.
read more Kitami Hachirobei
Kitami Hachirobei is a long-established store that has been in existence since the Edo Era. High-quality lacquerware used for daily life are sold, and the tatami room displaying its wares and the adjacent café are also popular. You can enjoy sweets and coffee in the lacquerware.
read more Kitakata Kura-no-Sato (Warehouse Village)
In the Edo Era, many of these residential warehouses were built in Kitakata, a highway town which prospered from the business of distributing goods. At Kura-no-Sato, the surviving residences were transported here so that the original townscape could be reproduced. The museum relates Kitakata’s distinct kura culture.
read more 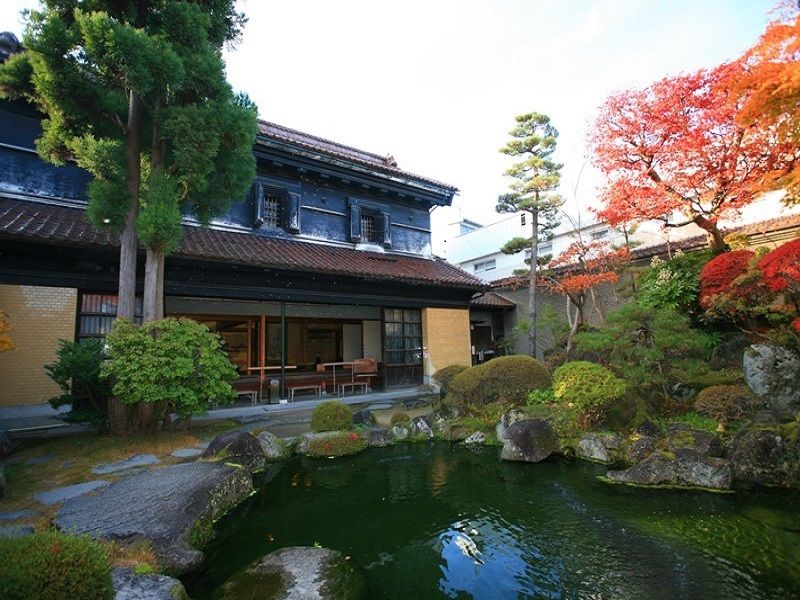 Kai Honke Kurazashiki
This gorgeous kura mansion that was built over 7 years in the early 20th century is splendid as an example of earthen wall and wooden architecture taken to its ultimate limits. In addition to the ornately decorated kura-style shop, there is also a soy sauce kura in which precious items and daily use items are on display.
read more 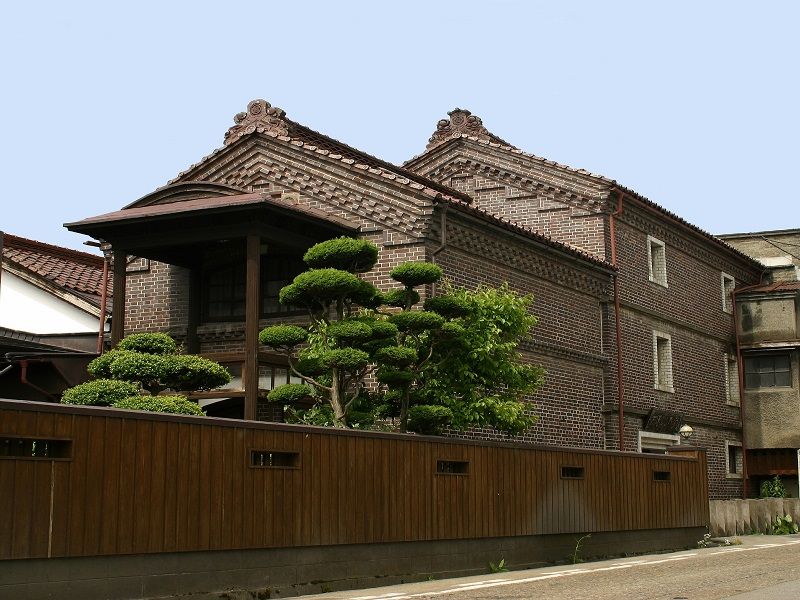 Wakaki Shoten Brick Warehouse/Showa Warehouse
Constructed in 1904, this is an unusual kura warehouse with a brick exterior. The Western-style exterior matched with the luxurious interior mastering Japanese architecture is splendid. Despite the passing of time, the ever-beautiful pattern of persimmon trees arranged in the Shimagaki Room must be seen.
read more 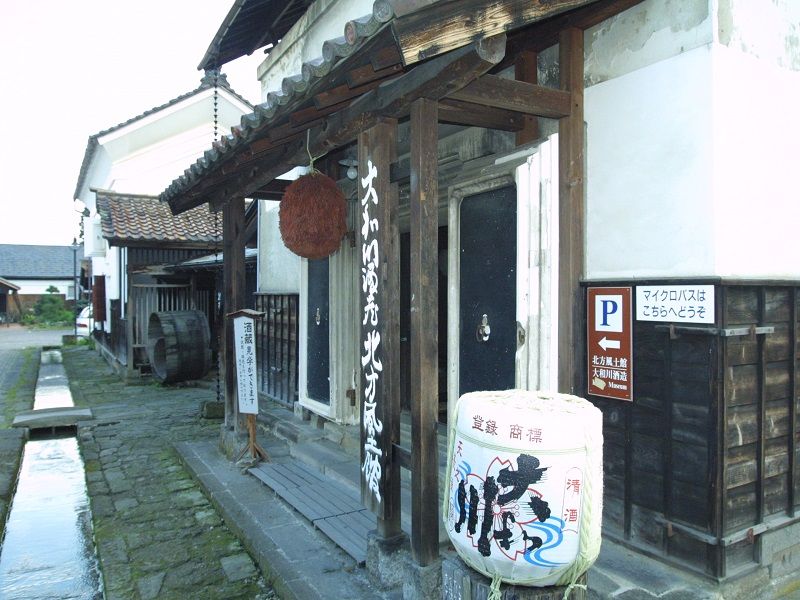 Yamatogawa Brewery/Northern Museum
Since Yamatogawa Brewery’s founding in 1790 during the Edo Era, it has produced many brands of sake representing Kitakata. You can enjoy a tour of this old brewery and experience sake tasting so that you can fully immerse yourself in the sake culture of Kitakata.
read more Kinomoto Lacquerwares and Crafts
Along with the traditional Aizu lacquerware created from the elegant techniques of makie, various handicrafts bringing alive the spirit of the local area are sold. Kirinoko dolls created from flakes of paulownia wood kneaded into clay are adorable and full of expression.
read more

Plan your trip to fukushima