The most famous meeting point in Shibuya and maybe in whole Tokyo is a statue of a dog called Hachiko. It has also become a very famous tourist spot. statue People wait by the statue for their friends just like this loyal dog waited for his owner for almost 10 years. The statue is located near Shibuya station, just when you get off from the station at Hachiko exit you should be able to see the the statue.

Hachiko (hachi=eight; kō=prince/duke) was born in 1923 near the Ōdate in Akita Prefecture. One year later, professor Hidesaburō Ueno adopted him as a pet and brought him to Tokyo. Every day when Ueno went to the university, Hachiko used to walk with him to Shibuya station and then wait there for his return. One day in 1925, Ueno did not come back, he died from a cerebral hemorrhage during class, but Hachiko kept waiting. For nearly ten years he would come to the station and wait at the same spot for the return of his master. At first people were bothered, especially the station staff, but one of Ueno's students found out that Hachiko is one out of 30 purebred Akitas and he wrote several articles about him and his faithfulness.
Suddenly the dog reached international famedom and became a symbol of loyalty. While Hatchiko was still alive at 1934 The first version of the statue of the dog was set to Shibuya station, Hatchiko himself was a big part of the ceremony. There is another statue of Hatchiko in Odate station at Odate city, Akita, this was Hatchikos.

On March 8, 1935 Hachiko was found dead in Shibuya, Hachiko was 11 years old at time of its death, which is around the normal age for Akita breed. Hachikos ashes were buried right next to professor Ueno in Aoyama cemetery, Tokyo.

The statue that stands in Shibuya today is not the original one, the original one was taken and the metal used in world war II. On 1498 the statue was remade by the son of the man who made the original Hatchiko statue. Bronze paw prints mark the exact spot where Hachiko was waiting for his owner every day. Today anyone can visit the National Museum of Nature and Science in Ueno where the stuffed Hachiko, which is made from the real fur of Hachiko

What remains today is the unconditional loyalty of one dog for his master. People still use this story as inspiration, many books has been written about the loyalty of Hatchiko, for children and adults. There have also been two movies made out of Hachiko, the first one was Japanese movie called Hachikō Monogatari (The tale of Hachiko 1987) and second one a American remake named Hachi: A dog's tale (2009), with Richard Gere in the lead role. There are also a lot of pop culture that has used the same kind of story, for example Futurama fans might remember the episode about Frys dog.

The statue is a lot more than just some statue near a station after you know the meaning behind it, it is a statue about loyalty and to remind you to always wait for those who are important to you. If you did not know the story about the statue, or never even heard about the statue, you might want to check it out.

Access: Yamanote Line (Hachiko exit). The statue is located outside behind the green train. 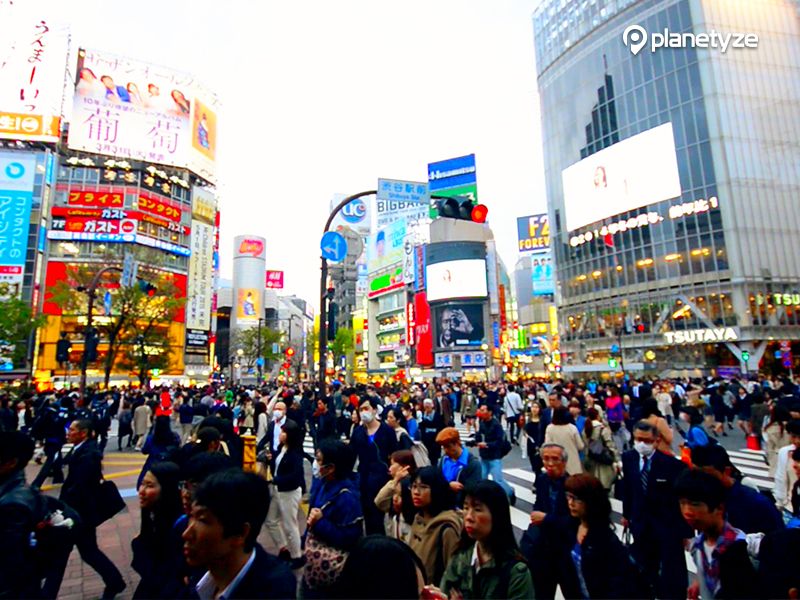 Shibuya
The famous intersection in Shibuya is the busiest in the world. Everyday, about 500,000 people cross this intersection. Besides shopping and the cuisine, you can also enjoy the unique atmosphere of the neighborhood.
read more

Plan your trip to tokyo

Things to do in Odaiba, Tokyo
Spring festivals near Tokyo
The best accessible beaches around the Tokyo Area
Top thins to do In Shibuya
Top things to do in Harajuku
Things to do in Ueno, Tokyo
Best pancakes in harajaku
Best luxury hotels in Tokyo
Best places to get souvenirs in Tokyo Japan
Kid-friendly sites in Tokyo: 13 spots at Tokyo Dome City
common.show-all (60+)
Planetyze
Private ToursAbout UsCompanyContact UsPress
Follow Us
YoutubeFacebookTwitterInstagramPinterest
Legal
Privacy PolicyTerms of Service